Long ago we promised more details about how we made the reclaimed wood shelves that we hung as part of our big kitchen remodel, so we’re finally back with every last measurement, stain method, and hanging tip. 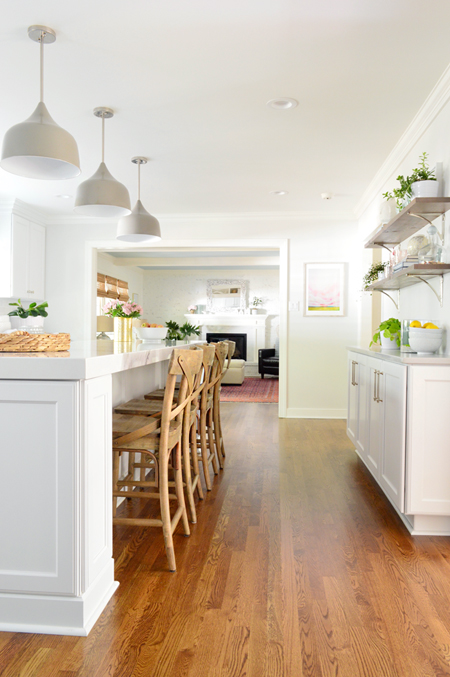 We hadn’t originally planned to put shelves there, but after our initial idea to display a large piece of art fell flat (literally – it felt like that wall needed more dimension) we turned our attention to shelves. Besides adding some storage for things in heavy rotation like drinking glasses (if you cycle through things fast enough they don’t have time to get dusty), Sherry has never met a shelf didn’t have fun accessorizing. Also, plants. Gotta love plants. 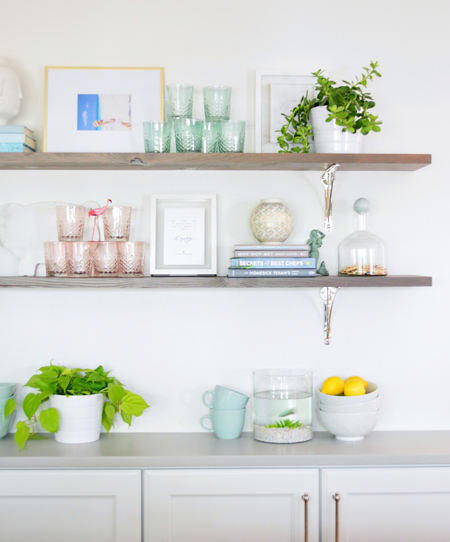 These shiny polished nickel brackets were our first decision. They’re from Rejuvenation and it gave us the chance to tie in the polished nickel finishes elsewhere in the room (they come in 3 other finishes too, FYI). And if you listened to Episode #24 of our podcast, you heard all about how we found ourselves in possession of two dozen of them instead of just the four we needed (and what the heck that has to do with Chipotle). 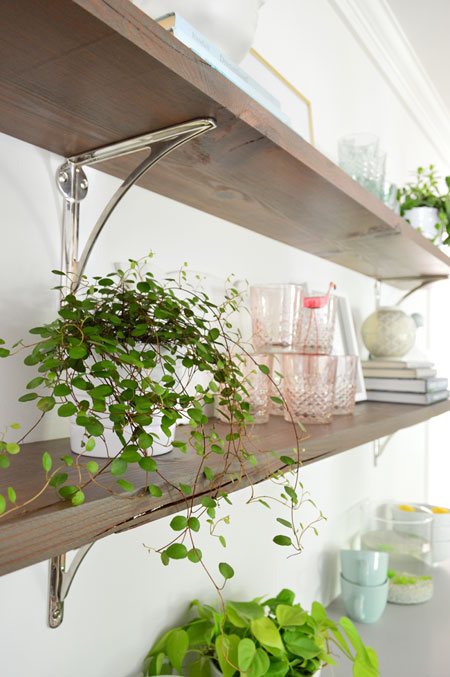 The actual shelving material/color was less clear to us. At first we considered doing some simple white shelves for a low contrast look, and even picked up some stock shelving boards to test out the idea. You may remember the picture below from our kitchen mistakes post, so ignore all of the other not-right things going on (we later tweaked the wall color, the pendants, and the door color, etc). For now let’s focus on the not-rightness of the white shelves. They just felt kind of thin and boring to us. And when we stepped back and stared at the kitchen from the living room, we pretty quickly realized that some wood tones on the left wall would add balance and warmth like the blinds on the right wall. 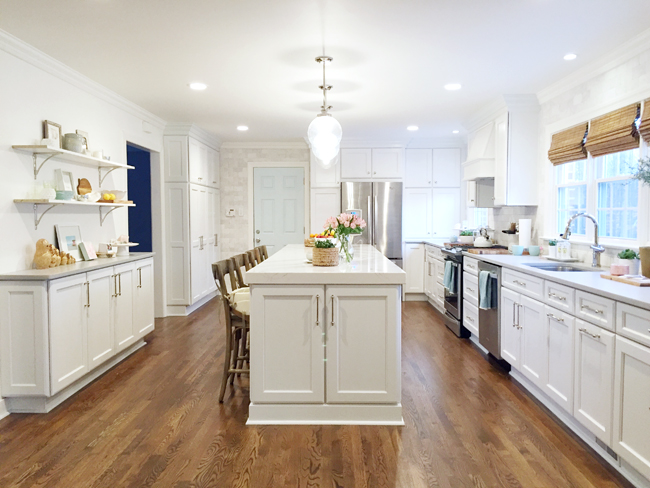 So we pivoted (picture Ross from friends screaming “PIVOT!”) to the idea of wood shelves. But the problem was that the basic wood available in the lumber aisle at the store was mostly sold in the same 3/4″ thickness that the too-thin white boards came in. And if it was thick enough, it didn’t have the depth or length we wanted (our ideal shelves would be 65″ long, 9″ deep, and a little over 1″ thick). At one point we almost purchased these salvaged boards from Rejuvenation that we spotted during our bracket purchase, which were noticeably thicker (1″) but even their most expensive option ($119 per board) was more than a foot too short of our desired length.

We really liked the old look of those Rejuvenation boards, so we called around to a few lumber and reclaimed wood places to see if we could find a longer solution locally. After a few strikeouts (some wouldn’t entertain such a small order) a place called E.T. Moore Manufacturing near downtown Richmond seemed promising. We were still a pretty small order for them (they do lots of full house floor installs and stuff) but we were able to pick from a ton of old salvaged boards they had collected from various tear downs & renovations in the state (and beyond!).

Ours ended up coming from an old barn in rural Virginia, and – the best part – they would cut and plane them to our preferred length and thickness. So we were able to get exactly what we wanted: two 65″ long pine boards, 9″ deep, and 1 1/4″ thick. Here they are coming home in the back of our car. 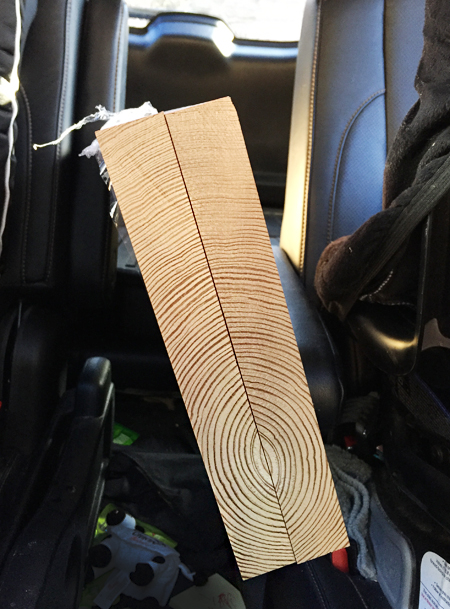 It was $100 total, so definitely more than grabbing a couple of 1 x 10″ project boards from Home Depot, but less than half the Rejuvenation option – and made to our exact specifications! The nicest part for us was that they have the interesting imperfections of old wood, yet they were the PERFECT size and FLAWLESSLY level and straight (thanks to their planing process, they weren’t warped or bowed like some boards you might grab off the shelf).

When we laid them on the brackets, the only thing left to contend with was the color. We were initially tempted to just to clear seal them and preserve the natural tone. 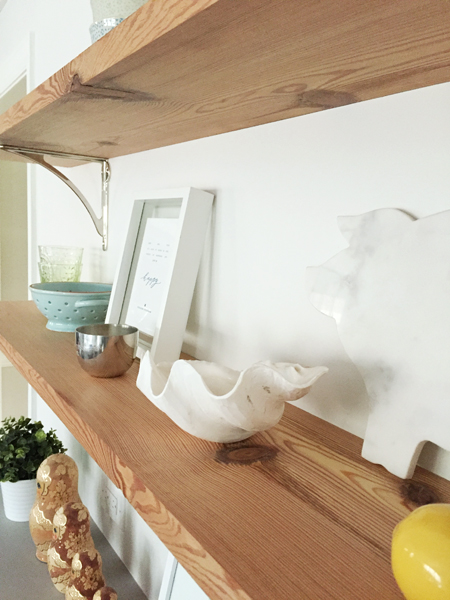 But after living with them for a couple of weeks we decided we’d prefer something a little less orange… closer to the color of the stools at the island and the floor. 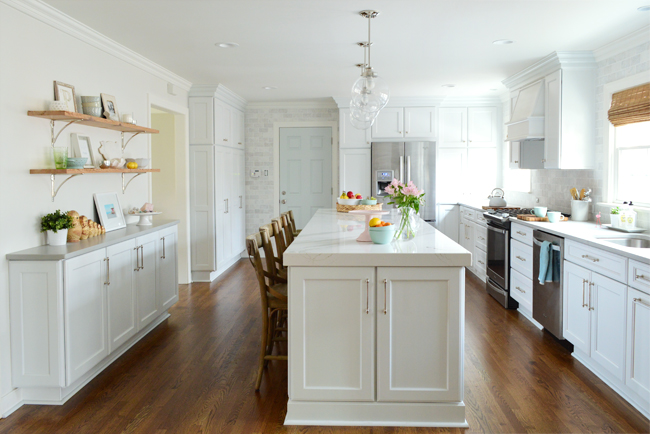 The gentleman at E.T.Moore had been nice enough to toss in a short scrap piece from the same batch of wood so we could test some stain before committing on the big boards (so helpful!). Because I was not about to ruin $100 worth of wood with the wrong stain choice (this is foreshadowing, btw).

After way too many hours spent googling, we decided to try a new-to-us technique involving vinegar and steel wool to help achieve that less orange undertone we were looking for. The process was pretty simple: we soaked a few pieces of steel wool in small buckets of distilled white vinegar for about a day. We tested just 1 piece of steel wool vs. 2 pieces, along with straight up gray stain (Minwax’s Classic Gray). This is what it looked like when it was freshly applied to our little test piece… 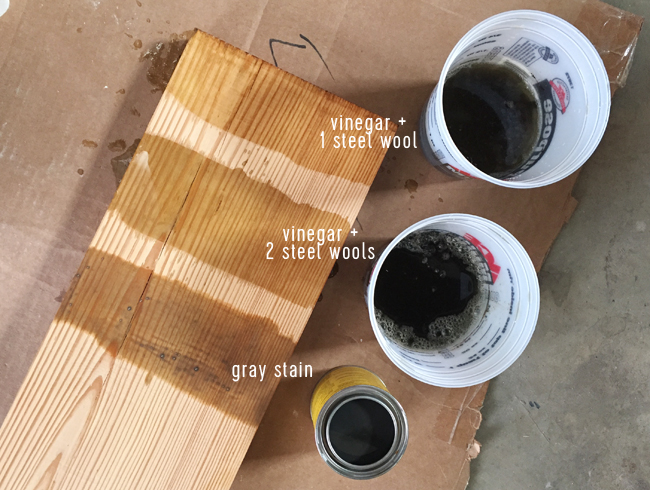 …and here are the results once they dried. You can see how the vinegar + steel wood mixture neutralized the orange undertone really nicely (even more effectively than the gray stain!), while still allowing the grain of the wood, and it’s imperfections, to show through. In fact the “vinegar + 1 steel wool” test spot was almost an exact match to our kitchen stools when everything dried. So we charged ahead confidently with that option. 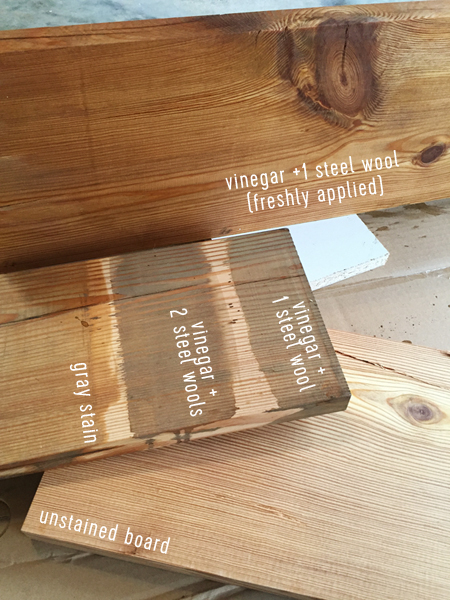 Now here’s where things got weird. The full board reacted TOTALLY DIFFERENTLY than the scrap board. We still can’t explain exactly what happened, but as we were staining the second board we noticed the first one was drying really, really, really red. Gulp. 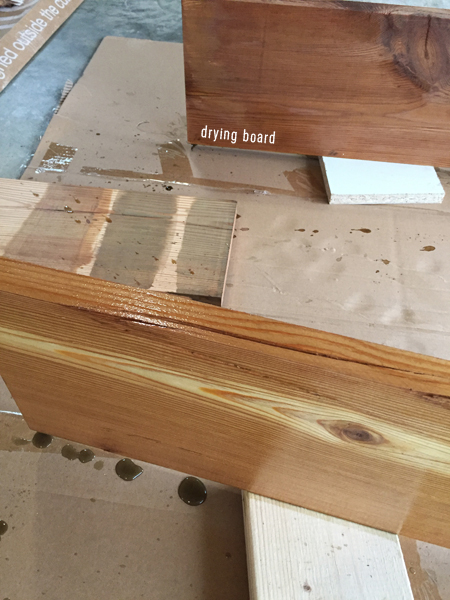 I’ll be honest – I was super bummed. I know we were being crazy particular about these, but we were being extra meticulous in the hope of getting the exact result we wanted. And I was actually pretty psyched about the tone the vinegar and steel wool wash had created on the test board.

Ever the optimist, Sherry bravely (or foolishly) tried to make them better by “graywashing” them with some leftover gray paint (Benjamin Moore’s Shaker Gray) mixed with a lot of water – about 5 parts water to 1 part paint. If all went poorly we could theoretically sand them all down and try again, but if it worked, well, that would be nice. 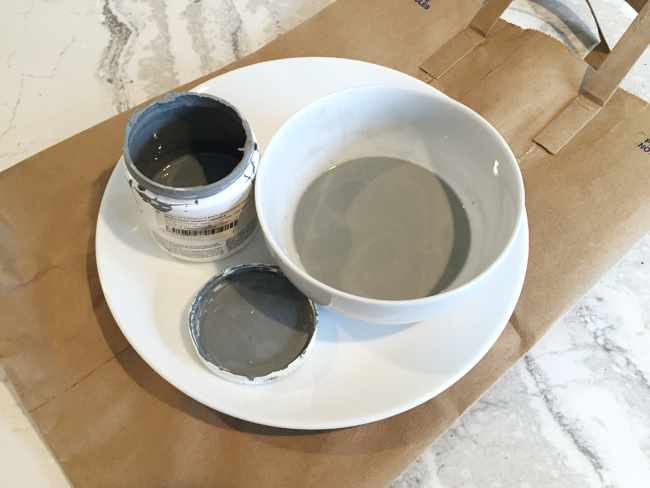 She brushed the watered down paint on and then rubbed it off, just like applying stain. It definitely cut the redness down A LOT, without taking away from the wood grain and those cool old cracks (we thought the roughness of the reclaimed wood was a nice foil to the sleek polished nickel brackets).

Is it an exact match to the stools or the floor? No. Is it the precise color we hoped the vinegar/steel wool would create? Nope to that too. But it’s not like our cutting boards and our blinds and our stools and our floors are all the same color anyway, so we decided to dial back our crazy a bit and just enjoy them. It’s kinda like there’s a family of wood tones that are living together in here – and the shelves are just another relative that’s not identical, but related. So when we let go of this expectation of perfection and stopped obsessing, well, everything looked pretty great together. 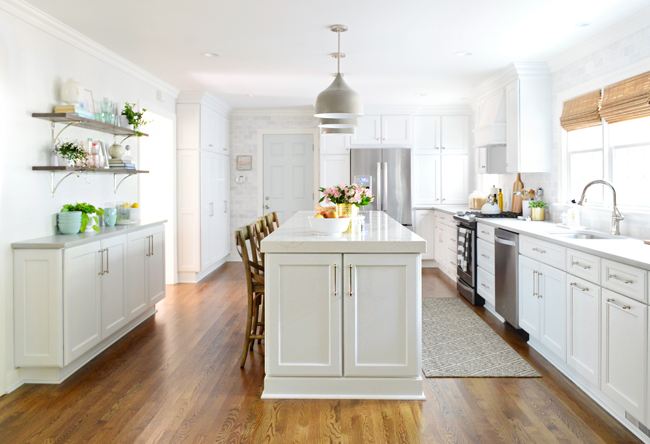 And for anyone wondering how we hung them, we used heavy duty anchors on one side, and actually got the other side into a stud, so they’re nice and secure.  There’s 18″ between the counter and the first shelf – since that’s the same gap between the counters and the upper cabinets on the other side of the room – and there’s 13″ between the shelves themselves. Another 18″ gap between the two shelves looked crazy, so we ended up at 13″ – leaving Sherry enough room to go to town without things getting cramped. 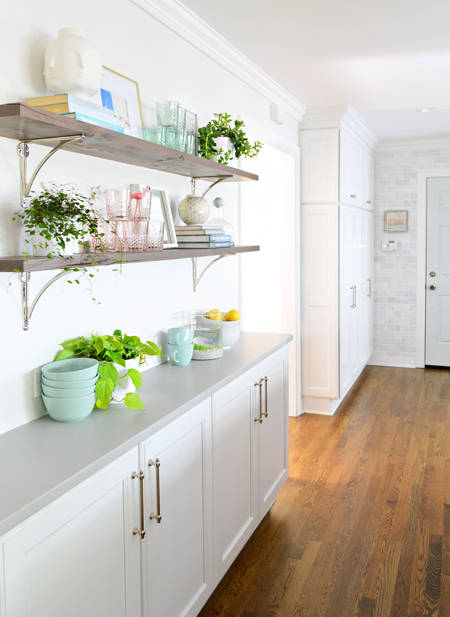 If you wanna see them “in action” in this downstairs house tour video – they show up around the 2:00 minute mark.

In the end, they’re a pretty great addition to the kitchen for the dimension and interest they add (we have a little bit of “old barn” in our house!) and for the sheer joy they give Sherry whenever she gets the urge to rearrange them (which happens pretty often). Also: the fact that three of the plants that were in the kitchen reveal post are still alive today is what Sherry likes to call “a post-Christmas miracle.”

#32 Transcript: The Stuff In Our House We Don’t Show You
#33 Transcript: In Pursuit Of Doing More & Buying Less